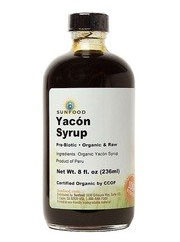 While there are always weight management products that are made in laboratories, that doesn’t always mean that whatever is made there is proven to be efficacious. Sometimes the chemical byproducts that companies spew out turn out to either be bad for you, or they may have the same results that a sugar pill would. If the thought of shuffling through an assortment of these kinds of products makes you despair, don’t worry. There are always alternatives. Like naturally based products.

Yacon Syrup is such a substance that has gained notoriety from being mentioned on the Dr. Oz Show. Since it’s being mentioned by this beloved television personality, people have started to use this product in the hopes that they too may start to resemble the thin models on both the movie and television screens. However, there are people who have voiced concerns that this substance doesn’t work as well as it is advertised to.

So can this plant based byproduct aid people in becoming the selves they so desperately wish they were? Find out below.

This substance comes from a plant that is native to the Andes mountains in South America. This flora corpus has been recognized to aid overall health in an assortment of ways, some of which include prohibiting cancer cell growth, supporting liver health, governing blood sugar levels and aiding the body’s digestive system.

In addition to these health benefits, there is some evidence to support that this may also aid in regulating cholesterol levels, as well as quenching the appetite. Despite this, the amount of studies that were done on yacon are limited, so to really say that it is as compelling a substance as it is marketed to be may be an overstatement.

Just because this review is on Yacon Syrup, it should be noted that there are other ways that people may ingest this substance. Also available on the market are chips, powders and pills that companies use to supply this ingredient to the body as well.

Yacon Syrup comes from Smallanthus sonchifolius, the scientific name for the yacon plant. Since it is a natural substance, there is no such thing as a singular company that has exclusive rights to the seeds of this flora. There are however, companies that choose to utilize this as an ingredient in their product’s ingredient lineups, as well as using this as a standalone supplement. Some of these companies include: Piping Rock Health Products, Vitamall, Sunfood Superfoods, Essential Living Foods and Navitas Naturals.

Contrasting with other substances that have a void where any scientific data on them should be, Yacon Syrup does have an amount of data regarding its robustness. However the data that is supporting it may not be as strong as health supplement companies like to assert. When I searched on Examine.com, the studies that were done had shown either minimal or no results in any of the categories it was check for. Additionally these were only based off multiple cohort studies or a single double blind trial, which is far from a double-blind peer reviewed study that has been done on a multitude of occasions. This is contra to the studies that have been done on the ingredients in Top Rated Products.

So with this information in mind, I could not say that this was known to really have much of an effect on weight loss. As is included with practically every weight management supplement, consistent exercise and diet are key to making sure that excess weight is lost. So when this is marketed, it is probably mentioned, and if people do see any difference in their weight, it may be attributed to this outside duo of facets, not necessarily the substance itself.

While this may have some effect on the diminishing of appetite, there are other important factors that are not addressed that are vital for weight loss. These are smoldering fat from the body, triggering thermogenesis, uplifting the metabolic rate or putting the energy levels on high. Without acknowledging these different aspects, substantial weight loss becomes much more questionable. Top Rated Products always address these different aspects of weight loss.

That isn’t to say however that this plant byproduct is completely free of any benefits. There may be benefits that people would experience, such as support for both the digestive system and liver. However in the realm of weight management, this does not seem to be the case.

It is suggested that people ingest about 20-25 grams a day, with 5-10 being about an hour before the main meals of the day.

From what I have researched, this substance appears to be relatively free of adverse reactions. If taken without eating this may cause abdominal distress, nausea and diarrhea. Additionally there was a case of someone having a severe allergic reaction after ingesting this. As such I urge people to be careful, because you may never know if you are also susceptible to such a reaction as well. Although rare, it would be best if a doctor is consulted before use.

Additionally, there have been some reports that yacon leaves, which are usually made into a tea may be toxic to the kidneys.

While there have been studies done on this plant byproduct, what is available is not sufficient enough to qualify this as a truly exceptional weight management substance. It is true that there may be some positive effects associated with this, but from what the studies have shown, the true effects are not substantial.

That is not to say that this is something like ephedra which is known to be harmful to users, but more something that would have you losing money and not weight. There are companies out there that will try to sell this on the grounds that it is all natural or that Dr. Oz has endorsed it, but just because a substance may have one or both of those, that doesn’t mean that it is actually effective in making weight loss dreams a reality. This is especially true if you are not exercising or dieting right.

Top Rated Products are better suited to assist you in reaching your weight loss goals.