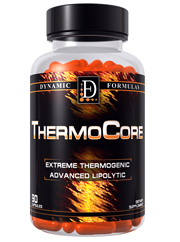 ThermoCore Review – All You Need to Know About This Product.

In years past, one of the most beloved ingredients to put into diet pills was ephedra. This substance is a powerful stimulant that while widely used, was also known to cause dangerous adverse reactions in users. This eventually led to the substance being outright banned altogether in 2004. Since then there has been a scramble by diet pill companies to find alternatives to this once widely used substance. Some replacements have been known to drive sales to the numbers that ephedra once did, and others have fallen miserably short, with these substances only creating a fraction of the effect that ephedra was able to bring to it’s users. ThermoCore was such a product that has attempted to replace this well known substance with another, citrus aurantium. There have been other companies that have utilized this ingredient, but not in an identical manner as ThermoCore, with the other ingredients that it has included.

So how does this product stand to others? Is it really superb, or is it in truth impotent? The following article will break it down.

ThermoCore is a weight management pill that more pertains to people who are athletic, and trying to attain the peak level of their abilities. The substances within ThermoCore may not suit people who have certain kinds of health problems well (more on this below.) A single look at the official website for this product reveals various muscular men and women who look to be in the very least, physically fit. ThermoCore declares that it will obliterate fat deposits, trigger thermogenesis as well as give it’s users a magnification of their energy levels and intensify their metabolic rate. Because this is meant to be used in conjunction with regular exercise, it is understandable that exercise and diet are not mentioned all that much. Although it would have been good to show a diet plan that may be implemented, this is sadly not present.

The webpage that features ThermoCore is pretty basic, outlining the different ingredients that this concoction is comprised of, how to take the product and warnings, but there is not much other information provided. It is also strange that, nowhere on the official webpage is there any mention as to how much this product costs. You would assume that this would be one of the first things that they would include, but for some reason they have not. Regardless of why this is absent, I was able to find the price of this blend to be $38.39 as it was featured on the website of a third party retailer.

I have found that at least previous, ThermoCore used to cost $72.95, but since then, the manufacturers have decided to sink their price.

Large Life LTD is the Manchester, England based company that can be accredited with creating ThermoCore. Amix Nutrition is the brand that was created by the company that has since become well known among nutritional supplement enthusiasts. The company is known to have branches in Europe, and has fan pages dedicated to them in Poland, Portugal and the Czech Republic, yet that doesn’t mean that their products only grace Europe. On the contrary, the company gasconades that their products are consumed on an international level. The company is known to produce goods that mainly pertain to fitness, but they also have products that deal with cosmetics and joint care as well. While the company understands at least partially the importance of social media, it only has a page on Facebook and no other social media platforms.

While the marketing copy for this concoction seems self-assured, that doesn’t necessarily mean that it works as well as it says it does. Nowhere on the official webpage are there any links to clinical studies that were performed neither on the product as a whole, nor on the individual ingredients that constitute ThermoCore. Moreover, the official webpage for this product features no customer testimonials, nor was I able to find any independent reviews on this product. It is true, that I did find a couple 5 star ratings, but there were no elaborations on this, and there were only two people who gave it this rating at that. If there’s one thing that is for sure, it’s that this concoction will give it’s users a step-up in energy levels; however, that doesn’t necessarily correlate to weight loss. If the user is not active, this may very well do nothing but keep the person wired for a duration of time and nothing more.

Top Rated Products do more than supply their users with a burst of directionless energy.

7 is the number of ingredients that is known to comprise ThermoCore. None of these ingredients are concocted together in a proprietary blend, and as such, the amounts that they are given in is listed. These ingredients include guarana dried extract (200 mg), citrus aurantium (10 mg), green coffee bean extract (250 mg), caffeine anhydrous (160 mg),  BioPerine (5 mg), white willow bark extract (200 mg) and coleus forskohlii (250 mg). Of these ingredients, citrus aurantium, guarana extract and caffeine anhydrous are all recognized to be stimulants. Coleus forskohlii is alleged to work as an annihilate fat deposits, yet clinical studies have revealed this substance to be impotent more than anything. In a similar manner, the competency of green coffee bean is also questionable, as there have been studies that show it has some effect on weight management, but only in individuals who are already obese, and not people of a more normal body type. Because this concoction is geared toward athletic people, it seems to me unlikely that they will experience the benefits of this ingredient. BioPerine is known to enhance the effects of other ingredients while white willow bark is acknowledged for its use in pain relief. Users are advised to take 2 capsules before physical exertion. Users are advised to not take more than the amount that was specified. 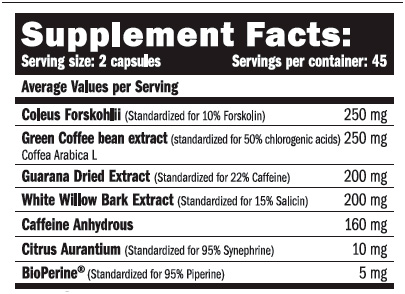 If there is one thing that ThermoCore is known to contain, it is stimulants. these range from the more mild caffeine anhydrous to the more extreme citrus aurantium. And that’s not including guarana extract, or the BioPerine, which is known to enhance the effects of these ingredients. Adverse reactions from these stimulants may include headaches, nervousness, irritability, hypertension (high blood pressure), jitters, nausea, palpitations (rapid heartbeat), trouble sleeping (insomnia), abdominal discomfort and anxiety. In severe cases, citrus aurantium may cause myocardial infarction (heart attack) as well as cerebrovascular accident (stroke). This is because it is chemically similar to ephedra. Women who are nursing or in stages of pregnancy, people who suffer from hypertension, seizures, glaucoma, arrhythmias (irregular heartbeat), ulcers enlarged prostates, liver, blood or eating or thyroid disorder or people who have problems urinating are not recommended to use this product. Additionally, ThermoCore contains shellfish, nuts and dairy, so people who are allergic to these substances are cautioned about using this product as well. Lastly, this is meant for adults, and children should be barred from use.

While there may be a level of truth that this product will give it’s users a surge of energy, that doesn’t necessarily mean that they will be subtracting pounds from themselves. The company has provided no clinical studies that show that either the ingredients, nor the product as a whole will have people losing weight in a successful fashion. Furthermore, the lack of customer reviews on this blend would seem to strengthen the argument that this concoction does not really work as it should, for if it did, why hasn’t anyone said so? Being meant for people who are more fitness orientated, this product limits itself on the people who may potentially use it. While it has found a replacement for ephedra, that doesn’t mean that it was very successful in achieving its goals. The sparse information provided on this product will further push prospective buyers away. If you are someone who is in shape and looking to improve on that foundation, there are other products that will support you in getting there in a more efficient fashion.

Top Rated Products may contain stimulants, but they are also known to be much safer than ephedra.