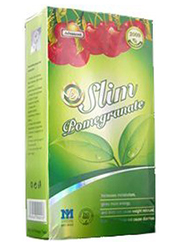 Whenever I see that a diet pill has it’s origins in China, I get more than a little incredulous about it. Chinese weight management products have a notorious reputations for not being what they say they are. Sometimes these  goods may have dangerous ingredients included in with them that are at no other point mentioned. And all the while, as if to cover themselves, it is incredibly difficult to figure out who the company that produced these diet pills are. These scam pills are easy to spot, as the grammar on their websites are deplorably poor. Just reading some of the text that they have posted would be enough to turn most people away, but for some reason there are still some people who buy into the false promises that these products entice individuals with. In today’s article, I will be reviewing Super Slim Pomegranate, a product that pretty much has all the different traits about it that I just described.

It is my hope that with this article, less people will fall into the traps that these weight loss pills lay for unsuspecting buyers.

Super Slim Pomegranate is a diet pill that has it’s origins in China. It asserts that it may have people losing weight by prohibiting the absorption of fat, while simultaneously detoxifying the body of harmful substances. What makes this product stand out as more unbelievable to me, is that it makes no mention as to how exercise and diet play a role in weight management. Instead, it gasconades that it is able to get people to subtract weight from themselves by just using this concoction! I’ll put this in bold so my point is understood well: there is no such thing as a diet pill that acts as a miracle.

The rest of the site that displays this product is written in bad English, the likes of which you would think that the person who wrote it was still in the process of learning the language. To make matters more confounding, there are multiple websites that offer this exact product! This obviously means that there are fake versions of Super Slim Pomegranate on the market. This doesn’t really surprise me, as Chinese diet pills are notorious for having fake version of themselves available. All have the same pictures of the box of the product, and all make generally the same allegations as the others, and all declare that they are the authentic ones, not the others! This already is so much of a hassle to deal with that, this would be enough for people to stop paying attention.

But to make my readers more aware of what’s out there, I will not stop my review here, and instead continue on to dissect this blend.

Nowhere on the official website is there any mention as to who the manufacture of Super Slim Pomegranate is. What the About Us page does say, is that the creators are the website themselves, but they go no further than explaining that, only instead talking about how their ordering system works. Furthermore, despite having a Contact Us page, there is no information given as to how to go about that! There are no email addresses, no phone numbers, not even a mailing location. If there’s one thing that this company does not want, it’s having people being able to locate them. Do I even need to say why this is a red flag? Or is it pretty apparent that when a company would rather not talk about itself at all, it may mean that they are hiding something from their consumers, more than just their identities. Again, this lack of information is more than enough reason to not buy this product. Moreover, in spite of the growing importance of social media, especially in regards to marketing, this company completely lacks a presence on any and all of the current social media platforms. The company makes it so that, if there is anything that you want to do with the product they produce, it has to go through their own official website and nothing else.

There is really no proof that Super Slim Pomegranate operates as sufficiently as it is retailed to. A look at the grammar that describes the product is enough to dissuade any confident thoughts that it would. There are some graphics explaining how Super Slim Pomegranate is supposed to generally work, however, there are no clinical trials provided that would verify that any of this is true.There’s a number that is used on one of the charts, saying that 28% of fat is prohibited from being absorbed. Where do they get this number though? There are no studies referenced to it! There are no studies referencing how the product as a whole or the ingredients that it is comprised of can in any way aid weight loss. But that’s just based off what I see as the blend’s attempt to explain itself. Then there’s the testimonials from customers. As may be expected, the only ones that are shown are the ones that are incredibly optimistic, but even with this, there are still problems. While there were grammatical errors with the homepage, so too are there grammatical errors with the customer testimonials! It’s as if the entire webpage was written by the same person! On the one hand it may be understandable if a single user misspelled words or used incorrect grammar; this is the internet, and sadly such things are getting worse as time goes on. But all of the customer testimonials featuring such errors? That seems more than just a bit off to me. Being that this is only available for purchase on the official website, I could not find any independent reviews.

Top Rated Products would never even imagine faking the customer testimonials that they post on their official websites.

There are 4 different ingredients that Super Slim Pomegranate mentions that it has within it. These ingredients are all known to be all natural, with 3 of 4 of them being fruits. These ingredients are kiwi, pomegranate, cassia seed and apple. There are no amounts given to any of the ingredients, so we have no way of knowing if a one of them comes in such diminutive amounts that they are absolutely pointless, and which ones may possibly come in an overwhelming amount. Of these ingredients, apple, kiwi and cassia seed are known to help with the digestive process, with cassia seed being recognized as a laxative and apple and kiwi containing fiber. Pomegranate is known to be full of antioxidants, but there is insufficient evidence that would show that it is at all competent in acting as a weight subduction aid. With this in mind, it may be surmised that the main way that this product works, is by acting as an appetite quencher and a laxative. Laxatives may have users losing some amount of weight, but they should not be relied upon for long term use (see section below.) Additionally, the FDA (Food and Drug Administration) 2 different substances that were not only not mentioned, but may also be harmful for human ingestion. These substances are phenolphthalein and sibutramine. Both of these have been banned for use in diet pills because of the precarious adverse reactions that may be experienced by users. This will be expanded on in the following section.

The company provides no information as to the proper dosing of Super Slim Pomegranate. 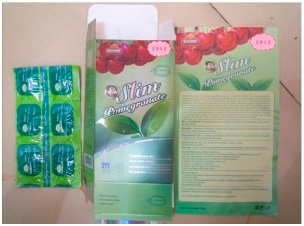 Because there seems to be such a heavy reliance on laxatives, there are dangers that are associated with being dependent on these substances. This especially pertains to phenolphthalein, which has been banned from use. Adverse reactions pertaining to laxative abuse may include kidney damage, blurred vision, liver damage, tremors, general weakness, fainting and in extreme circumstances, even death. With dependence on such substances, it is possible that the colon will become accustomed to the substances, and use of ever increasing amounts of laxatives may become necessary just to excrete at all! There is also the possibility of mineral and electrolyte imbalances from overuse of laxatives. Sibutramine is a substance that has been found within Super Slim Pomegranate and this has been linked to hypertension (high blood pressure) as well as palpitations (rapid heart beat), which may be especially dangerous to users with pre-existing health conditions, especially those that pertain to the heart. People who are not recommended to take this product are women who are nursing or in stages of pregnancy, people with pre-existing health conditions that pertain to the liver, heart, kidneys, cardiovascular system, people with hypertension and individuals above the age of 65 or below 18 years of age.

Top Rated Products would never hide substances that have been banned for use by the federal government within them.

It doesn’t take much to not trust this product. A simple minute long look at the homepage of the product would reveal a plethora of grammatical errors that should instantly dissuade people from even considering this product. That is not to mention that there are no clinical studies provided at all in relation to this product. Featuring testimonials from customers that are very probably fake, to hiding dangerous ingredients within the concoction, everything about this product is wrong. You would do well to stay away from it, and any other weight management goods that look in anyway similar to this.

Top Rated Products present themselves in such a way that they would rival movies.