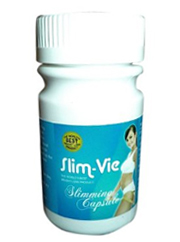 Slim-Vie Review – The Truth About This Product.

While some diet pills may be on the market for years, decades even in some cases, others are not as fortunate. For one reason or another these products become discontinued, as either they just aren’t selling as optimally as initially thought, or there is a problem with the ingredients that it is comprised of. Slim-Vie is a case of a product that certain government bodies would rather see discontinued. In 2023, the FDA (Food and Drug Administration) issued a safety warning, announcing that there has been an ingredient ath was found in Slim-Vie that was not mentioned on the label. This ingredient is sibutramine, and it was banned from use back in 2023. Weight management products that originate from China, such as this one, have a deplorable reputation for containing dangerous substances that aren’t otherwise previously mentioned. This isn’t always the case, but there are many instances where this was proved to be correct.

Slim-Vie is just one of many examples. In the following article I will break this concoction down, so you will be better informed as to what kinds of weight loss products should be avoided in the future.

It’s actually a bit confusing to find information about Slim-Vie, as it is scattered to several different sources. There is also another product that goes by an almost identical name (minus the hyphen in Slim-Vie) that has been recalled already, which had a different set of ingredients associated with it. What makes it hard, is that Slim-Vie doesn’t have a website with information about it. From the product’s Facebook page, there is a link to a page that provides absolutely no information about the concoction. All it mentions, is how to buy the product.

From a third party supplier, I was able to gather more information on this byproduct of substances. Slim-Vie alleges that it will have the metabolic rate surging, fat will be eviscerated, hunger pangs will be quashed, fat absorption will be impeded and that these effects will be witnessed on the very first day of use. The text that is written on Slim-Vie is of poor quality, and there are grammatical and spelling errors abound throughout the product description. It’s pretty obvious this is a red flag, as if they can’t even spell words right when describing their own product, it makes the imagination incredibly active in trying to ascertain what else may be wrong with this byproduct of substances.

The description itself has a confusing layout and I had a hard time trying to figure out where the certain points it was trying to make were, and how it is all linked up. Improper use of English did nothing but exacerbate this issue.

Absolutely nowhere is it ever mentioned who the manufacturer of Slim-Vie is. The most that we know about this company, is that it is located in China. Past this there is not so much as a phone number or address where they are located. Not only does this make the product feel less legitimate, but less trustworthy as well. For if you aren’t given any information about the makers of the product, how are we to trust whatever else they may say? What else may they be hiding? This is of course all assumed and I have no way of proving anything, but it doesn’t look good for the company one way or another.

Despite the broken English that is used to support Slim-Vie, nowhere are there any scientific studies that would bulwark any assertions that this product will either operate as retailed, or not result in any adverse reactions (more on this below.) All that we are supplied with, are a list of bullet points, but no explanation as to how any of the ingredients even work. While there are positive reviews that have been written on this product that may be featured in visible areas that third party suppliers have on their comment sections, I have to be a bit questionable, as some of these reviewers either don’t reveal their identities at all or they happen to go by aliases. Because of this, these are hardly credible sources. There are also people who have used this product who were utterly disappointed in the lack of results that Slim-Vie produced, with some users experiencing adverse reactions. One user even noticed that the ingredients that were presented when purchased online were not the same as the ones on the pill bottle she received. This is something that diet pills that have their origins in China have become notorious for, and as is the case also, with Slim-Vie.

Top Rated Products never lie about the ingredients that are found within them.

There are only 5 different ingredients that have been listed to be contained within Slim-Vie. There is no listing as to the exact amounts of any of these substances, nor are there any daily recommended values supplied either. All that is mentioned, is that the total contents of a single capsule amounts to 350 mg. These ingredients include cassia seeds, amylum, Job’s tears seed, bitter orange and mulberry leaf extract. Of these ingredients, Job’s tears seed and amylum are not known to affect weight loss in any form, as there is a void in the space where clinical studies would have been performed. Bitter orange is an astoundingly powerful stimulant that may cause hazardous side effects in users, who might otherwise be healthy and young. Cassia seeds are known to have an effect that would be described as a laxative, however it is not safe to depend on laxatives as a form of weight loss. Mulberry leaf extract is known to govern blood sugar levels and keep them in an even state. Then there’s sibutramine, the hidden ingredient that was found within Slim-Vie. This substance was initially used to combat obesity, but has since been banned because of the precarious health consequences associated with it’s use.

Users are instructed to ingest a single capsule in the morning, preferrable on an empty stomach. The makers of this product don’t specify if there is a daily maximum that should not be exceeded, although I would strongly advise if you do purchase this product, not take more than is what is recommended.

While the description for Slim-Vie lists that there are no adverse reactions associated with this product, I find this hard to believe after taking a look at the product’s ingredient lineup and seeing that bitter orange is one of the listed ingredients. This substance is acknowledged to be the chemical twin to ephedra, which was banned because of the adverse reactions that are associated with it, and that may be potentially dangerous. These side effects include hypertension (high blood pressure), myocardial infarction (heart attack), fainting, palpitations (rapid heart rate) and cerebrovascular accident (stroke). Other adverse effects that have been reported from Slim-Vie use include problems sleeping (insomnia), abdominal pains, headaches, tingling sensations all over the body, nausea, xerostomia (cotton mouth) and a thirst that doesn’t seem to be able to be quenched. Cassia seed which is also present in Slim-Vie is known to cause diarrhea, muscle spasms, anxiety and fatigue. As mentioned in a previous section, the FDA found sibutramine to be contained within this concoction. Sibutramine has been known to interact negatively with medications people use, as well as it being known for being hazardous to the health of people who have health problems pertaining to arrhythmias (irregular heartbeat), congestive heart failure, stroke and coronary artery disease. Women who are nursing or in stages of pregnancy are advised to avoid using this product. Also being similarly barred from consuming Slim-Vie are individuals who are either below 18 years of age or who are above 60 years old.

Top Rated Products would never be dishonest about adverse reactions that may be experienced from their use.

If there was ever a poster child example of the kind of diet pill that should be avoided as if it was an incredibly infectious disease, it would be the example that this concoction sets forth. Already having a bad reputation from its place of origin, the presentation of this product is confusing and utilizes an inferior quality of English grammar which makes it rather difficult to understand exactly what they are trying to express. And this is only the product description! There is no mention as to what company even made this product, there are no clinical trials provided or even mentioned and there may be even potentially dangerous ingredients included within this concoction that weren’t otherwise mentioned! And that’s not getting to the point that, there is a possibility that the product you may be receiving may not even have the same ingredients that were listed on the internet. You would do well to stay away from this product, and anything else that seems similar to it.

Top Rated Products are the literal antithesis to the example that the afore mentioned product has created around itself.