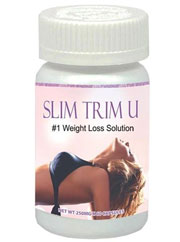 Slim Trim U Review – Does it Really Work?

There are many different reasons as to why a product may be discontinued. In some cases, it’s simply a matter of bad sales numbers. The product simply is not that popular, no matter how good the manufacturers may think that the advertising copy may be. Other times it may come to light that the product in question is really nothing better than a scam, with nice, flashy images that entice people into giving away their credit card numbers, unaware of an unmentioned auto-shipment feature that will force the customers to have to come back for more. Then there are times when the company is hiding something else that is not an auto-shipment feature. Sometimes the thing that they are hiding is a substance that is used as an ingredient. And why would they hide it? In some cases, the ingredient in question may be known to be dangerous.

Such is the case with Slim Trim U, as after it was released into the market, the FDA (Food and Drug Administration) had found the illegal substance sibutramine hidden within the concoction.

When searching up Slim Trim U, it may be a bit confusing, as the original company that was known to manufacture it, Floyd Nutrition, no longer has it listed on its official website. Instead, another company, Ultimate Weight Loss Co., has stepped in and claimed the product as their own, changing the picture on the label, but not altering the ingredient lineup. It is as if the product itself got a fresh start and discarded any issues that had been a problem with it in the past.

Slim Trim U asserts that it operates by quelling the appetite, annihilating fat deposits and also halting the formation of fat within the body, as well as heighten the metabolic rate. The new producers of this concoction allege that the product is all natural. While the ingredient lineup that is present may be true, the scars of Slim Trim U’s former self still leave me wondering if it really is, as at least from a layman’s glance, nothing really seems to have changed. As with the old product, the description for this current itineration also fails to mention how exercise and diet play a role, other than saying you don’t need to spend a lot of time in the gym to see results.

This has made me skeptical as to if any change was made at all. So far, there doesn’t seem to be.

Originally manufactured by Floyd Nutrition, Slim Trim U is now under the ownership of Ultimate Weight Loss Co., a company that did not see it fit to list where their headquarters are located anywhere on their official website. The company does have an About Us page however, upon closer inspection, I could only find four lines of text of which the company has anything to say about itself. The rest of the space that is available on the page is instead dedicated to a picture and testimonial of a customer who had used a Ultimate Weight Loss Co.’s product and was happy about it. Although seemingly secretive in nature, the company does have a presence on Facebook. Although not on any other social media platform, this still does show that they have at least some understanding of the importance of social media in the contemporary world. I decided to do some more research and I was able to uncover that the company has not been accredited by the BBB (Better Business Bureau). Additionally, in the past 3 years there have been 9 complaints filed against the company, 6 of which were about issues with deliver and 3 of those issues were about problems people had regarding the product that was being sold to them.

Does Slim Trim U work?

In spite of the marketing copy sounding sanguine, there are still holes in the argument that this product really is as superb as it is alleged to be. There are no scientific studies that have been provided either on the product as a whole, nor on the individual ingredients that would authenticate that Slim Trim U really does work as it is retailed to. Furthermore, none of the amounts of the ingredients are listed, so we have no way of knowing how good or bad any of the amounts really are. There isn’t even a supplement label provided that would list even a proprietary blend amount! With such a stunning lack of information, there does not seem to be a lot of reason to have faith in this product. This is notwithstanding that, most of the ingredients have nothing to do with weight subduction (more on this below.) Everything about what I have seen about this product is not enough to convince me that what I am seeing, is nothing more than an commercial. From the users that have posted independent reviews on this product, I have seen many that are negative, with some users derogating this product over the adverse effects that they experienced.

Top Rated Products always list the amounts of the individual ingredients that they are comprised of.

Slim Trim U Ingredients and Dosage

There are 16 different ingredients that are listed to comprise Slim Trim U. These ingredients are:  Lotus seed, chinese yams, bee pollen, dietary fiber, Barbary wolfberry  fruit, rhubarb, radish seed, polygonum multiflorum, malt, green tea, hawthorn, aloe, mulberry, vitamins, astragalus and gynostemma. Of these ingredients, the vast majority of them don’t have any relation to weight subduction. What we do find are a few substances that are known to act as laxatives (aloe, mulberry, polygonum multiflorum), as well as some others that may have some positive effect on magnifying the metabolic rate (green tea, Barbary wolfberry fruit) and some that have really only showed results in limited studies that were done on animal test subjects (gynostemma, lotus leaf). Moreover, at no point are there any amounts listed to the specific ingredients. This makes it impossible to know as to which ingredients may be competent, and which ones are the antithesis to the word “competent”. And this is not mentioning, that there may be the possibility that sibutramine may be hidden in this concoction as well. There have been reviews of when the product was still produced from Floyd Nutrition with people complaining of adverse reactions due to the hidden ingredient, but who is to say if it is still present now.

Users are instructed to consume two capsules before breakfast on a daily basis. There was no supplement label provided by the company.

While the website featuring Slim Trim U doesn’t even say the words “side effects” that doesn’t therefore mean that there aren’t any. It just means that the company, for one reason or another, didn’t happen to mention it. While not from the same company, everything about Slim Trim U seems to be relatively intact from the product that it once was. The assertions about not having to make much of a change in lifestyle are the same, even the ingredients have not changed in the slightest. Which gets me to wondering, is sibutramine still present within this blend?

Sibutramine is a substance that was banned from use in 2023 because of the adverse effects that were experienced by users. In some cases, these side effects were known to be detrimental to the well being of the people who consumed them. These adverse reactions include back pain, xerostomia (dry mouth), problems sleeping (insomnia), headaches, flu-like symptoms, nervousness, rashes on the skin, lightheadedness and anxiety. More serious adverse reactions include seizures, chest pain, swelling lower and upper extremities, as well as the face, eye pain, confusion, depression, unusual bleeding, palpitations (rapid heartbeat), still muscles and shortness of breath. This substance has also known to abnormally interact with people who are on other forms of medication. It is not recommended for women who are breastfeeding or in stages of pregnancy to consume sibutramine.

Top Rated Products would never contain illegal substances such as sibutramine within their lineup of ingredients.

While it may be produced by a different company, there is too much that strikes similar to the product that the FDA had warned the public about. Additionally, there are a lack of clinical studies performed either on the ingredients, nor the product as a whole that would certify that this concoction really is as robust a product as it is marketed to people to be. With no mention as to the amounts to the individual ingredients, we have no way of knowing if some of the ingredients come in dangerously high amounts, or if they are barely even present within the blend. And this is notwithstanding the possibility of sibutramine being in the product. With so many different issues, I would advise looking into a weight management product that would come off as the literal opposite of this example.

Top Rated Products have never had an FDA advisory released on the dangers of consuming them.

One Response to Slim Trim U Review – Does it Really Work?