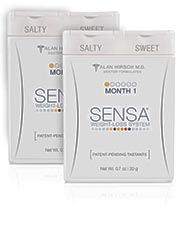 Sensa Review – All You Need to Know About This Product.

Not all weight loss products are known to live up to their declarations. Sometimes, there are companies that spew products that are solely meant for people to buy, the actual effectiveness of them being a non-issue. The only thing that the manufacturers of these products care about, are the profits that they will make. Yet with the right advertising keywords, people will believe anything. Such is the case with a product that was known as Sensa.

What caught people’s attention so much with this product, was that it wasn’t some pill, capsule or tablet. It didn’t come in a little dropper that you were supposed to apply under your tongue. No this was a powder that you put over your food. Novelty, uniqueness; these are qualities that draw people to buy products. Ultimately this product was discontinued, and all we are left of it, is the official website that has been shut down.

This review will break down what this product was, and will give you information on what to watch out for, should you encounter similar scams.

Sensa was a powder that was to be applied over the meals that people consumed over the course of the day. As they did this, it was alleged that the appetite would be affected, and as a result people would begin to eat less. Unlike other weight management products, this one did not encourage people to change their diet at all, or to even think about exercising. Top Rated Products are based in reality, unlike this product.

The product was asserted to have evidence to back it up, but this evidence was only from it’s founder, Dr. Alan Hirsch. There were never any independent studies done on this product to prove that it in any way aided in the reduction of appetite.

The product didn’t even try to hide behind the tactic of being a digestive aid that some products use. No, a quenched appetite was enough, and people believed it would work.

Dr. Alan Hirsch can be attributed to giving birth to the product known as Sensa. The man was known to be a neurologist who had written a total of six books on the senses. It was with this knowledge that he had that topically he seemed like a credible source as the creator of Sensa.

The doctor had spent a lot of his time dealing with patients who had issues with taste and smell. He worked on this topic so much that he became an authority on the issue, which gave him the material he needed to write his books. So with all this experience he was able to make a product that would act as an aid in the battle for weight loss. And people believed him.

More than just people. News corporations like CNN, magazines like Vogue, all eyes were on him as he peddled a product that he declared worked. What no one suspected initially however, is that his whole aim was to make money. That’s why the product costed people $59.95 and had an auto shipment feature. But when people are caught in the gaze of something that looks like a miracle, they’ll go along with it, hoping that it is, wanting desperately to believe they aren’t being lied to.

Being that this product is no longer available for sale, it’s pretty obvious that it didn’t work. If you break it down simply, there is no way it would work. How is it that not changing your diet, and not including exercise will somehow result in a loss of weight from a user’s body? If you want to see a subtraction from your body, you need to subtract something. You don’t just add a powder on top of what you have and expect change.

While Dr. Hirsch did supply a study, it was a study that only he was able to cite. Top Rated Products cite multiple sources in their studies. There were never any independent ones done on Sensa, he just used his career as a neurologist to somehow speak as proof that he knew what he was talking about. Although the longer the product was available, the more other scientists argued that he may be no better than a snake oil salesman.

And as more of this product was purchased, the more the general public began to realize this as well. From Amazon.com reviews that date back to June of 2023, out of 59 total reviews, 43 of them were no higher than a 2 star rating. And there was only one rating that was at a 2 star level!

While scams may make money in the short run, they are not immortal. The truth of what it really is always shows itself in the end.

The only instructions for Sensa were that it was to be sprinkled over food. There were no other instructions beside this, but there was the promise to users that they may be like a few of the lucky test subjects who had lost 30 pounds from this product. It’s that hope that they too could be someone exceptional that kept this product in sale..that is, at least for a little while.

Because the product is no longer available for sale, the ingredient amounts could not be found.

There were side effects associated with Sensa, but the list is not very long. These adverse reactions included diarrhea, headaches, sore mouth, hypertension and abdominal discomfort.

One of the ingredients maltodextrin has been known to possibly negatively affect bacteria that is found in the gut.

Today an internet search of Sensa will bring up a page of how the website was shutdown in October of 2023. No longer are people being duped by a smiling scam artist in a white lab coat. The disgraced doctor has fallen away to the shadows, with his legacy being tainted by the words “pseudoscience”  and “scam”.

There are lessons that may be learned from this product. Number 1: Products that makes allegations that seem to be angelically perfect are usually made up of nothing but hollow promises. Number 2: Watch out for the auto shipment feature, always read the fine print carefully, lest you want your hard earned cash to disappear. And Number 3: Not everyone who claims to be a doctor is really out there to help you. Sometimes, they are just a shady businessman, looking to take your money away with a smile on their face.

Top Rated Products all come from companies that are much more reputable than this one was.