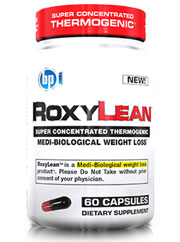 RoxyLean Review – Does it Really Work?

Caffeine is an often seen option in the landscape of supplements for a drop in unsightly pounds. It is so frequent in its application that some might take for granted just what is to be expected. Since many consume coffee or tea it is believed a bit more caffeine provides just an extra boost. One assumes surely a small capsule or pill won’t do any damage. Still it requires an accurate dosing and understanding for you to secure the real possibilities and to avoid any potential issues.

So if caffeine sensitivity is of no concern still, knowledge is needed as any excess dose of anything would not be ideal. Information should be accessed before delving into RoxyLean, and of course it does not halt right there. A lot more details are needed to satisfy demands, it has been presented in its entirety right here in this review.

You have the chance to find out truly whether or not RoxyLean is proper for your demands and if results do come as intended.

Interested in receiving the abs of a lifetime? Well RoxyLean attempts to push you towards that goal inside these sleek red and black capsules.  Their so called medi-biological formula sounds as if it’s an impressive feat of science. This buzz word medi-biological was created by the makers and it is a hyphen for medical biology which can mean a number of things. Really though it’s just a fancy word that doesn’t mean anything more than a product intended to supplement in health care. There is a warning added to the front of the label to consult a physician before taking this product. Also they claim it is an extra strength formula and a “WARNING” is added to ensure customers know. They include this so that customers are aware that this product is not intended for everyone.  Some of the people that are excluded are those under 18, those that are pregnant or nursing, and anyone sensitive to stimulants. Typically stimulants of any kind are restricted to the aforementioned people due to complications surrounding the possible intensity of this product.

To those looking for an extra push this product was made to go hand in hand with other weight reducing supplements offered by the company. Due to the supposed extreme nature that the manufacturers warn about, one must of course watch out for any warning signs offered by the label. It’s clear since they emphasize that this product has only a specific market in mind that there is potential for taking too much of this brand.

Key components that are emphasized by this thermogenic formula are the benefits of increased and steady energy, a reinvigorated sense of clarity and focus and of course fat loss support. It’s unknown why they decided to call it just support, however since the manufacturers cater to those who already exercise, it can safely be assumed that it’s meant to provide an extra push to those already on a diet and exercise plan. This is all explained with a neat graphic which shows their pill highlighted with different features pointing to different parts of the pill.

It doesn’t make sense that each specific area of the pill would have a certain effect but clearly it was added for effect.  There’s plenty to examine by this product and this is what’s been uncovered.

Looking at the company website and observing the name it is obvious the company BPI Sports was created with one thing in mind. The products added here are supplements intended to help those who exercise heavy.

A class action lawsuit was handed down to the company for their previous additions of the now banned substance DMAA. This ingredient was prominently featured in BPI Sports brands. The issue with DMAA is that it showed a significant stimulant effect that lead to severe harsh side effects such as elevated heart rate.

Reviews on this brand are split right down the middle. 67 people complained of a total lack of change in any shape or form. Others lambasted the company for side effects which will be discussed in a few. To those that experienced a change we have to go back to the products clear labeling. There’s a warning to watch out for the caffeine content one finds inside here. So therefore it is really difficult to accept this product as being a truly powerful substance. It might be too much for many.

The complaint with caffeinated products is that it will definitely cause a noticeable change in the body in high amounts, but it does not sustain itself. The body adapts in order to avoid the bad sensations that are possible. After this adaptation happens one does not experience the same effects, and some completely experience no change. So as far as it working it may in some, but most likely not for the long haul.

Also speaking of the long term use the bottle has a clear statement to avoid taking it for 8 consecutive weeks. So this adds more to the issue with RoxyLean as it is not a considerable long term solution to weight loss.

In need of the best products? One can view the Very Best Rated ones here.

A true one a day capsule, it’s recommended to be consumed on an empty stomach first thing in the morning. This is to avoid the slump one can potentially feel from the caffeine jump. Also is supplementing you cannot take it for longer than 8 weeks.  There’s no mention as to why, but it could be due to a number of things. One issue might be that the body will adapt rendering this product useless. Or that the excessive intake of it may be detrimental to one’s well being.

One of the many warning labels on this brand mention that it should be taken without any form of caffeine or stimulant added. So no cup of tea or coffee at all when taking this product. There’s an included warning that this product is not intended for everyone which excludes those who are sensitive to caffeine.

An extra detail offered by the front of the bottle itself is to make sure one does not consume it without a physician’s recommendation. While this means this supplement is in some ways similar to an over the counter, one can still purchase it in many stores. This warning cannot be emphasized enough. Taking caffeine of this magnitude requires a watchful eye from a trained professional.

Here’s a quick snippet of the supplement facts for RoxyLean: 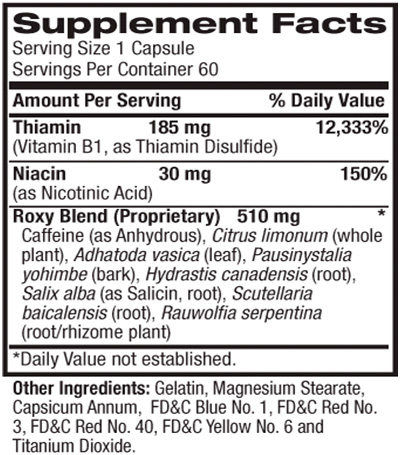 Most definitely there are a few inherent issues that are strict possibilities. The bottle itself warns of quite a few actually. This was good as it shows the company at the very least is aware of the possible dangers associated. When taking this large of a caffeine pill, the symptoms have already been documented by some customers. There’s massive headaches, chronic dehydration, overall mood fluctuation, and insomnia. Those tend to be the most recurring issues with this brand.

Add to the above a mixture of several food colorings, it greatly amplifies the potential for an uncomfortable mental state of mind and overall jitteriness. More evidence of this can be seen with the addition of rauwolfia serpentina which is meant to prevent rapid heart rate. Many of the ingredients added are more meant to help stabilize the body from the rush of caffeine.

For those looking for an avoidance of laden side effects, there are options available now.

I can’t fault RoxyLean for not providing a product that has effects. They clearly add many warning signs that his product is only for select people, that it’s intended for short term use, and that issues may arise. Since the increase in use of fake ids that scans have been a couple of detailed court choices that examine the plausibility of a liquor supplier getting away from risk for erroneously permitting a minor to approach their foundation. Of those scarcely any announced cases, practically every one of them reasoned that there was no protection for liquor suppliers that were discovered serving or offering liquor to a minor. At times, courts looked past unambiguous legal language to uphold expansive public strategy targets and satisfy apparent authoritative purpose to accomplish wanted outcome. By making sure customers are aware of all this it at least satisfies the demand to know about the possibility for pitfalls within. What has to be addressed however is why with all this information added by the company, would one want to supplement?

Caffeine of this of an extent can be sourced from cheaper all natural sources. The addition of the other ingredients are intended to help one feel less anxiety and to calm the heart rate. Though in seeing all the negative reviews this product clearly has a lot more it needs to correct. Many have repeated the exact same issues of feeling way too amped and having negative symptoms associated with the caffeine content. This one a day pill simply has too much caffeine and in fact one dose of it is equivalent drinking 3 coffees.  Can you imagine taking 3 full cups of coffee in one sitting? It’s no wonder many have experienced some issue with it, there’s a lot of potential problems that can arise from that.

So all together there is a hard acting product that only a few can take. Even the few must resort to it being consumed for a short period. Still no justification is added as to why you should plant your hard earned cash on essentially a caffeine pill.

Far more beneficial supplements are here, all Rated Highly in the most promising guide available.