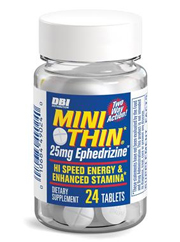 Mini Thins (with ephedra) Review – The Truth About This Product.

Over a decade ago, one of the most beloved substances to be used in weight loss products was a substance known as ephedra. Known in China as ma huang, this substance is known to be an incredibly powerful stimulant that was able to give it’s users a surge of energy, as well as annihilate their appetites. There were downsides of using this substance, as there were more and more stories of dangerous adverse reactions that were experienced after people consumed this product. In 2004 ephedra was banned, and with it, many companies began to scramble to find a replacement for the once beloved, now notorious substance. Mini Thins was such a product that contained ephedra, but had to later find a replacement in the form of synephrine, which is chemically identical to ephedra. This only resulted in the concoction itself losing much of the popularity that was once associated with it. In today’s article we will dissect what this product was in it’s prior state, before the ephedra ban had taken place.

Sometimes it’s good to look back at past weight management products, as it shows where the current generation came from, and why the market looks the way it currently does.

Mini Thins were diet pills that were known to contain ephedra within them. Ephedra is a substance that is not only known to intensify energy levels, but also quash hunger pangs as well. It was widely used by people ranging from athletic body builders, to more casual dieters looking to subtract a few pounds from their frames, all without changing their lifestyles in any significantly noticeable way. In spite of this popularity, there were many dangerous adverse reactions that people experienced when using this substance (more on this below.)

Currently there are no products on the market that actually contain ephedra, such as the current itineration of Mini Thins. Much of the information that pertains to the original may be found online, although the website that features this information is more of a blog, and not really a catalog of products that are purported to contain ephedra.

While the company that used to produce the original itineration of Mini Thins is still currently active, they no longer feature a version of their product that contains ephedra. Instead, the version of what they sell contains garcinia cambogia.

DBI Distribution is the Carmel, Indiana based company that has been known to produce Mini Thins. The company is known to manufacture dietary supplements as well as pharmaceuticals that may be purchased over-the-counter. For the most part, products that have the DBI Distribution brand may be purchased from convenient stores. The kinds of products that the company specialize in include sleep aids, weight management products, male health and energy supplements. The company also gasconades that it is recognized for it’s customer service staff that is friendly, it’s 10% discount when $200 or more of products is purchased, as well as the free shipping that is included if more than $50 are spent at their online store. Past these points however, the company does not provide much other information about itself. The company has some understanding of how important social media has become in the au courant world, and as such, they have a presence on both Twitter and Facebook. Where they lack any kind of presence however, are on the Pinterest, Google+, Tumblr and Instagram platforms.

There are many people that may report that ephedra does indeed act beneficially in regards to weight loss. There is also some evidence to show that the substance may be beneficial for people who suffer from afflictions such as asthma, as it may assist with breathing issues. However, clinical studies that have been done on the substance have revealed it to be potentially dangerous, especially when used in high amounts, or with other substances, such as caffeine. This is the cardinal drawback of this product; while there is potential for it to work, there is also a lot of risk that goes into using the concoction at all. As with any blend that contains ephedra, the negative aspects of it heavily outweigh any potential benefits that may be experienced. It is because of this that the ban on the  substance was established in the first place. This is notwithstanding that while ephedra proponents may look at this substance with much adoration, there are still people who have used this product and who did not witness the results that they were expecting to see. What may work for some does not necessarily work for everyone.

Top Rated Products are generally safe to consume, and are free of any dangerous adverse reactions that other diet pills may have entail with their use.

At the time, Mini Thins contained only two ingredients; ephedra and caffeine. Both of these are known to be stimulants, and may be dangerous when combined. Neither of these ingredients were in a proprietary blend, so there amounts were known to be 25 mg for ephedra and 50 mg for caffeine. The caffeine was meant to complement the ephedra to sustain the incineration of fat, not necessarily being used for its stimulating properties. There is currently no label available of the product, neither is there any information available as to what the proper dosage of this product was. The only information that is available, pertains to the current iterations of the product which have already removed ephedra from their ingredient lineup.

The main draw toward Mini Thins was that it contained ephedra, which although recognized and liked by many, has also been known to cause dangerous adverse reactions in some of it’s users. The side effects that have been associated with this substance include palpitations (rapid heartbeat), irritability, dizziness, headaches, vomiting, anxiety, nausea and restlessness. In more serious circumstances, ephedra has been linked to arrhythmia (irregular heartbeat), muscle disorders, myocardial infarction (heart attack), hypertension (high blood pressure), cerebrovascular accident (stroke), fainting and even death. There is a higher likelihood that these adverse reactions may be experienced when stimulants, such as caffeine (as was the case with Mini Thins) are added into the brew. Women who were in stages of pregnancy or breastfeeding and individuals with pre-existing health conditions such as diabetes, kidney stones, hypertension, seizures, chest pains and narrow angle glaucoma were not recommended to use this concoction. Similarly barred from using this concoction were individuals under 18 years of age.

Top Rated Products do not contain ephedra, or any other substances that are generally recognized to not be safe for human consumption.

In the contemporary world, there is still a version of Mini Thins available for purchase, albeit without the ingredient that made it popular in the first place. While there are many that derogate the current itineration of the concoction, it’s not as if the original was much better. When you take into account all the negative adverse reactions that may be experienced, It really doesn’t come off as worth the risk. Managing your weight should be something that makes you healthier, not something that may possibly be detrimental to your overall health. There are however, too many people that may see the negative adverse reactions as simply something that is to be acknowledged and dealt with regardless.

There is a reason that ephedra was banned from use in diet pills. There are too many health related concerns to be taken into account, as all the scientific clinical studies that were performed on the substance would acknowledge. While it may have caused a spike in sales while it was in existence, it was changed for a reason. Nowadays while there may be products that declare themselves to still contain ephedra, some of these may just be using the word to draw customers in, while instead putting in a substitute for the substance instead. Unless you have no problem putting your health at risk, you are better off trying other diet pills that are known to be much safer to use.

Top Rated Products became as successful as they currently are from learning from the mistakes of other diet pills prior to them have made.