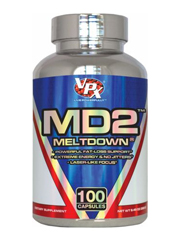 MD2 Meltdown Review – The Truth About This Product.

Supporting your weight loss through the addition of stimulants is not a new idea, but it has been modified with new ingredients in recent times. Stimulants all have the same general purpose in the body, however the strength and duration are dependent on how much and what you take in. This can come from all natural sources and it can even come about through synthetic means. Typically there isn’t much emphasis on natural remedies in recent times due to companies scavenging for the very best stimulants. Of course in considering the best stimulants you have to keep in mind it still works on the nervous system in ways that have to be measured accurately.

For example some common seen issues with taking stimulants can be hyperactivity and jitteriness to name some of the most common. Also there is options for weight loss without stimulants, so you aren’t doomed only to stimulants.

Still with the rapid increase of supplements meant to target energy it becomes important to distinguish what their potential is. That is why this breakdown of MD2 Meltdown is presented, to give a detailed insight.

Loaded with images of shirtless people flexing their abs, the tag line placed on this product is that it is the “world’s hardest rockin’ brain and body stimulant“.  The targeted objectives are to give you more attention, energy and of course fat loss. What still isn’t known is if it is the world’s best stimulant, then it implies they have provided a better product than illegal stimulants like amphetamine. It is intended to be formulated with the most up to date ingredients on the market according to the marketing claims. So perhaps that is why they make the claims of being the best.

Another interesting belief spread by the company is that taking this brand will allow for no tolerance build up, meaning it can be taken without having to cycle or take time off between doses. This idea is a bit new as stimulants for the most part are intended for short bursts as they eventually wear off. The sad reality of most stimulants is that they can provide short term change and then the body quickly adapts leading to it being useless. Another issue is of course the rate of potential side effects.  So to have this claimed ability there is some unique properties found. A lot of emphasis is spent on showing how scientific insight when into the creation process as well.

Since the product is available on several online retailers stores and it has a presence it allows for a proper review of what is to be gained here. So MD2 Meltdown asserts to do plenty, let us reveal the reality.

A 1993 founded company named Vital Pharmaceuticals has created the MD2 Meltdown supplement alongside other supplements for athletic activities.

In 2023 the company received an FDA warning letter for the inclusion of a potentially harmful drug in Amp Citrate or DMBA. It has not been tested enough to be considered safe to be used in a supplement and the FDA required the company take prompt action to remove this ingredient. In the letter it is revealed the drug is not considered safe enough and that is why the warning was pushed. Since the warning was sent near the time of this writing the company has not revealed if they have changed their formula yet. No updated supplements facts list is out and the company does not publish its entire ingredient list on their own website.

Well the issue with this fat burner is the exclusions. Anyone 18 and under cannot take it, anyone 15 pounds overweight or more cannot take it, and anyone expecting weight loss are not recommended to take it. On the warning label of the bottle itself all this is imprinted. The most striking aspect is the claim to this not helping aid in weight loss. Though the marketing promises accelerated fat burning they add a caveat that contradicts the claim. So you aren’t meant to lose weight with it, but you are able to? It clearly lacks any sense.

Another weird fact is that this product is not intended for more than 8 weeks of consecutive supplementation. They do add as part of their marketing campaign however that it is meant to stay with power and not lose any tolerance. So this means it is either not safe or that they lied about the tolerance aspect of the brand.

Either way very few people are intended to supplement with this brand and it remains confusing as to what expectations one may have. Customer accounts are incredibly limited that it is hard to gauge a proper consensus on this supplements use.

The most favorite brands by customers are available for viewing here.

The unique ingredient here intended to not impose a tolerance is Theacrine, it is similar to caffeine and is a stimulant. However the research on this is incredibly limited and no long term studies have been performed.

Of course caffeine anhydrous or dehydrated caffeine is also added to the mix intended to be less caffeine than “3 cups of coffee”, which is still a ton.

Different forms of the Yohimbe extract are added which has been known to produce some fat burning effects, however they are seen mostly in fasted stated. Also it has been linked to a high rate of anxiety as well.

2 capsules are recommended a day for a period of 8 weeks only. Of course this means about 6 cups of coffee a day and of course one must read the lengthy warning label to know it if works within one person’s health demands. For example if taken before surgery or with any health issues it is not intended to be consumed.

Presented here is the blend of ingredients inside MD2 Meltdown. It remains unclear as to how much of it has been changed since the FDA left a letter demanding they take off the potentially harmful Citrate extract: 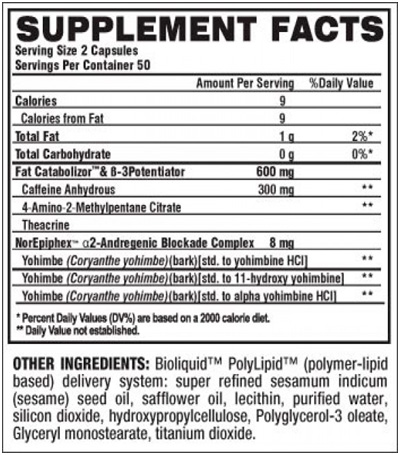 Absolutely there are a series of potential issues inherent with mixing all these ingredients together.

First off the combination is not commonly seen and the interactions results are not well studied. Also even Theacrine has lacked any sufficient studies so its possibilities are really a mystery.

Since the caffeine taken is equivalent to 6 cups a day, some of the most common side effects that can potentially disrupt are rapid heart rate, mood swings, insomnia, jitters and anxiety of an extreme degree. Also it is unclear if they have fully removed DMBA from their ingredient list, if not the rate of potential issues is significantly higher.

Less likely issues arise when supplementing with the right brand.

With the inclusion of relatively new ingredients there is a lot of information required before assuming it will do the trick. One also has to really intently watch their intake and know what to expect. Well the complication here for MD2 Meltdown is that plenty is unknown.

Assuming they actually took into account what the FDA demanded, there still is issue over other ingredients. The rate of caffeine is extremely high and even if it can be consumed without side effects, it can only be taken for 8 week stretches.

Also the rate for issues would be high for just one of the ingredients. Take for example Yohimbe which this product has 3 strains of, there have been noted side effects documented about it. Looking at Theacrine there is more doubt as it has a severely limited amount of studies to document its use.

Simply put with the contradicting labels which claim no tolerance but then quickly admit it isn’t true, and the lack of knowledge on if they removed the FDA unapproved ingredient, far too much is missing here. Before taking any supplement there should be clear information instead of contradicting statements. Since it is also not clear as to what is officially inside, it leaves a lack of necessary information.

Finding the proper solution for your own needs can be found when taking the top ranking supplements available now.