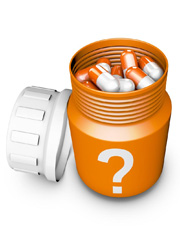 Lean-EFX Review – How Safe and Effective is it?

Mixing thermogenics is a common practice for many of the supplements for intended weight loss.  A blend known as a proprietary formula houses many different ingredients intended to increase metabolism. The ultimate benefit that a thermogenic has it that it works through one’s day without having to put in extra effort. However, depending on the thermogenic it can also be overwhelming. So dosing and ingredient strength therefore become fundamental factors in seeing if a brand will work. Not just for effectiveness however, but also safety.

What Lean-EFX hopes to add to this equation is a thermogenic blend with the stated capability to cause real weight loss. However one needs more than just belief in order to have weight loss happen. The benefit of reading this outline is that it reviews the brand from all angles. In the end you will have a firm grasp and understanding on what is to be gained here.

So you can truly understand whether or not Lean-EFX is something you need. Or if it is something that can be left behind.

Self described as a scientifically backed formula for focus, mood, energy enhancement in an all day setting and for reducing and aiding in stable appetite. They promise what is to be a full length serving of energy without any of the nasty negatives such as jitters or harmful crashes that so many other energy formulas have. Apparently the brand has been re formulated from a previous batch, however this new batch is far more superior according to the makers.  It is recommended to introduce a diet that is “clean”(no mention as to what exactly this entails) and just a light touch of added exercise for the full effects to appear. They even add a tagline that says you can live your life by making excuses, or you can make the changes needed now to feel so much better.  A 30 day supply can be bought from the company website for $49.95.

Looking at these sleek looking orange bottles make the package stand out. However that is just one aspect shown on this weight loss brand.

The creators go by the name of FormuTech Nutrition and they sell many supplements for muscle gains, pre workout energy boosts and other athletic purposes.

The company has been recently bought out by the supplement company Hi-Tech Pharmaceuticals out of Georgia. This highly controversial company has had many encounters with both the FTC and the FDA. Recent letters sent to the company have targeted them due to their addition of banned substances known to potentially cause severe harm.  They have also received warning letters over the unfounded claims on their websites which claimed their products could produce positive effects that were not proven to exist. It is unclear if the company will overtake this brand however an emphasis must be places as the company has had FDA intervention on multiple occasions. There was even a raid on the company in the past for their supplements due to contamination with a banned substance.

Looking at all the reviews that exist out there on the internet it became clear that there is a boost in energy for some people and others have also added appetite suppression as well. Most of the positive claims added were about energy however, this makes sense when you consider there is Caffeine present in these batches.  Still one of the issues with having Caffeine is that the body builds up a tolerance. After this tolerance is set in place one either has to stop taking it as much, or experience a lack of the same benefits. Also appetite suppression can be explained with the addition of this ingredient as well.

Sustained and properly functioning products allow for a long term use.

The product is meant to be doses early in the day as to not bring on the potential insomnia. Also it is recommended first thing in the morning with a meal as to not upset the stomach.  A maximum of 2 pills a day is highly recommended.

Looking at the proprietary blends there is quite a lot of ingredient present.  First on the menu are B vitamins for metabolism. Then there is the thermogenic Evodiamine which increases metabolism. Green Coffee Bean Extract and Caffeine both provide a bit of energy and focus.

L-Theanine comes usually from Green Tea and is known to relax the body.  L-Phenylalanine is present for an amino acid presence intended for a series of things such as mood enhancement, however it has not been shown to produce that in supplement form.  Panax Ginseng however does have positive effects on the brain, improving overall cognition. Also Tryptophan is added here which aids in mood and sleep.

Here is a sample labeling for the Lean-EFX brand under question.: 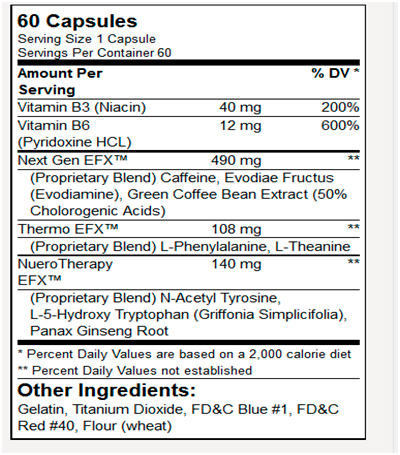 Side effects can surely come potentially and they have been reported by some actual customer accounts. A few have added feeling they felt extreme jitters. Others have added an odd side effect seen in their skin. With an extreme red flushing of the skin and an inability to concentrate and sit down. The red skin sensation may be due to the niacin flush which is possible in large doses of niacin. Typically it is seen as not harmful in the long term, however many added feeling very nervous when this came on. Also others report that it is important to take it early as the manufactures have stated, this is due to the potential rate of insomnia.

Other issues can also arise when supplementing with the above ingredients inducing vomiting, nausea, headaches, irritability and mood swings, increased rapid heart rate, jump in blood pressure, inability to focus and feelings of depression.  Also added to the mix is the fact one has to watch their intake under the eye of a physician in order to prevent potential issues.

Making sure you gain results without the fear of side effects is entirely possible, with the proper brands.

Although the brand mentions a lot of positive benefits without any of the crash or issues in some other brands, the customer accounts beg to differ. Quite a few people who even reported positive energy and appetite suppression effects have mentioned the rate of uncomfortable jitters. This is most likely due to the combination of Caffeine and other stimulants added. Still it is not known exactly what the possible culprit is for this unwanted effect. What is known however is that the brand is now ran under a company which has had a slew of negative experiences. Experiences which lead to multiple lawsuits and FDA intervention.

The FDA has had a long held issue with the company now behind this product. The manufacturers have added ingredients to their products which were not deemed as being safe or acceptable for the addition into supplements. So the fact the FDA has raided their facilities is one big looming threat. Also the fact the CEO of the company has been incarcerated due to the unwarranted claims made by their products is a huge statement. If a company has had a history of having unwarranted claims that lead to incarceration then you know there is a lot of negative history. With this in mind it does not make sense how they could acquire this brand and still be given a full appreciation. One must take what is offered here as a serious question mark and demand a lot more.

All that is featured here is a mix of ingredients that have shown some benefit as far as energy and appetite suppression. Both of these things however are common things seen in a Caffeine supplemented product, which of course can be found for much cheaper in all natural foods. Still the rate of multiple side effects felt by customers goes against what the company claimed to be no negative issues. So with the company history, several negative customer accounts and FDA intervention, it leaves too much doubt as to how this product is set to produce results.

Brands that are stimulant free yet still functional are the better option for the desired weight loss you seek.