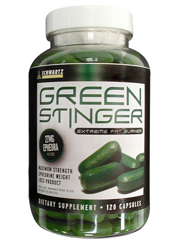 Green Stinger Review – All You Need to Know About This Product.

It always surprises me that despite the federal government making ephedra illegal, it is still possible to find for sale in a variety of weight loss supplements. It was in 2004 that ephedra  was officially banned in the United States, and since then diet pill companies have been scrambling to find alternatives to this once well regarded substance. Some of these replacement substances have been known to replicate the effects of ephedra, such as bitter orange (even the dangerous side effects.) Others have fallen drastically shorter in attaining their goals. Other companies may not even care, and decide to include ephedra in their products anyway. Sometimes it’s not really that ephedra is being used, it’s just said it is, while in reality another substance is taking it’s place. There’s a way to do it if there’s a will to do it. There are always loopholes around situations and in this case, Green Stinger has found a way.

Although not coming in a vast quantity (27 milligrams), Green Stinger joins the ranks of diet pills that contain this substance.

Green Stinger makes declarations about itself, asserting that it steps up energy levels, incinerates fat, sinks body fat levels as well as improving mental dexterity. Because of the yohimbine that is found in this product, it may also enhance sexual experiences, which although exciting to some, is not primary goal of a weight loss product. With these claimed benefits, this product markets itself towards people who are athletic and much a part of the fitness world. This may be attributed to the ephedra in the product, as well as the supporting stimulants. However even though the creators of this like highlighting this substance as it’s selling point, I can’t help but feel it may be more of a health hazard if anything.

So how good is this product in living up to it’s own declarations? Read on to find out.

Schwarz Laboratories is the Cincinnati, Ohio based company that is responsible for indoctrinating Green Stinger into the realm of reality. Itself being created in 1993, the company boasts that it has under its employment fitness experts who work to guarantee that their products are only of the highest caliber possible.Their customer base is not limited to the domestic market of the United States, but also includes people from various reaches of the entire world. The company asserts it’s with this international pool of customers that they are able to deliver the most premium products that they are able to make.

The company also declares that the standards that it holds its creations to are of a much higher rank than the general compliance levels with over the counter drugs. As stated on their website, they have modified these standards to ensure that their products are of a exceptional quality, or so they declare. Other products that Schwarz Laboratories specialize in include vitamin supplements, meal replacement products as well as joint health supplements.Knowing that the company has an array of different products does make me feel a bit more at ease, as I have encountered scam companies that only produce one product, and even then they are still vague on any other information that they may give about themselves.

While there are aspects that this product does work, it depends what the goals you are trying to reach are. With the powerful stimulants that are included, there is no doubt that users will feel an eruption of energy from Green Stinger. The green tea that is a part of the proprietary brew may also aid the body in receiving a healthy dose of antioxidants known as catechins, which are known to combat the damage that free radicals may cause. While this may be true, that doesn’t mean that the product as a whole is really that great at eliminating unwanted pounds from the bodies of users. No where on the official website (or 3rd party websites for that matter) are clinical studies provided that would back up any allegations that this product is indeed a product of superior quality that may assist people in reaching their weight loss goals. Without this, I can’t say for certain that this product actually works as well as it states, although I am inclined to believe that it doesn’t.

Top Rated Products have published clinical studies that can bulwark any assertions that their manufacturers make about them.

In total there are 11 key ingredients that makeup Green Stinger. As mentioned in the advertising, ephedra is one of the ingredients, albeit it does not come in as great a quantity as other ingredients in this brew do, totalling in at a meager 27 milligrams. Synephrine is ephedra’s chemical twin, as is the second listed on the label, weighing in at a much more massive 170 mg. Other stimulants that are included in this concoction are Acacia Rigidula (150 mg) and green tea (120 mg). These are undoubtedly enhanced by the inclusion of Yohimbine. Additionally there are other ingredients induced into this blend that are known to positively affect the user’s state of mind, such as Theobroma Cocoa and Phenylethylamine HCl. With such ingredients however, there are bound to be adverse reactions, which I will go over in the following section.

With the stimulants that are concocted into this blend, it does not surprise me that there would be adverse reactions. Ephedra is known to cause side effects which include nervousness, vomiting, irritability, headaches, tremors and dizziness. Although it’s more serious side effects may be averted because of the low dosage it comes in, the synephrine that is included may make up for this. The side effects are very similar, but when this is included with the other stimulants, as well as the yohimbine, more severe adverse reactions may be experienced. These may include hypertension (high blood pressure), myocardial infarction (heart attack), rapid heartbeat (palpitations) and cerebrovascular accident (stroke). In addition to this, phenylethylamine HCl is known to adversely react with people with high blood pressure, people who are consuming stimulants and people with heart disorders. Because of this people with pre-existing conditions, people who are sensitive to stimulants and women who are in stages of pregnancy or who may be nursing are not advise to consume this byproduct of substances.

Products that are Top Rated would never include ingredients that could be so potentially dangerous.

The first signal to me that there may be something wrong with this product is that the manufacturers make it a focal point to mention that ephedra can be found within this product. Knowing that it was made illegal for the health risks that are associated with it made me skeptical from the start. Including other powerful stimulants such as synephrine and enhancers such as yohimbine do nothing to assuage my concerns over the safety of this product. Lastly though, without any scientific backing to prove the efficiency of this product (or it’s safety) I cannot in good conscious recommend people to take this product.

Top Rated Products are known to be much safer, and do not contain dangerous substances such as ephedra.