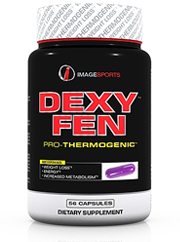 Dexyfen Review – All You Need to Know About This Product.

Not every diet pill that hits the market is able to stay there in the long term. There are products that end up being recalled, either because they are found to be completely impotent, because they are part of a scam or because they have been revealed to be dangerous to a person’s well being. Dexyfen is such a product, that cannot be found on its creator’s website, nor at third party retailers that used to sell it, such as BodyBuilding.com. The best that I could find was on Amazon.com, and there’s only 1 of these left in stock! (And with the user rating being so mediocre, I wouldn’t say that it is because it is known for being a particularly competent product either.) The most that people will most likely be able to find about this product, are from websites that have review articles and blog posts on this product.

When products happen to become scarce as is the case with Dexyfen, there is most likely a pretty good reason behind the disappearance.

Dexyfen was marketed as a thermogenic agent that would also have the metabolism skyrocket. The problem from what I can ascertain, is that in some cases it did this too well, in some cases dangerously so. It’s important to know what kinds of products are out there, and which ones to stay away from. It’s easy to get overwhelmed with the amount of products available, and all the different ingredient names can get so confusing, it’s as if you are trying to decipher a foreign language.

In the following article I will break down what this product was, so you, the readers of this article, will be more aware of the kinds of products to watch out for and their qualities.

Image Sports is the company that is responsible for manufacturing Dexyfen. The company is relatively new, as it was only created in 2023. Unlike most companies, the official website does not list a location as to where it’s headquarters are located. I find this rather strange and concerning, as this is general information that should be widely available to potential buyers. Instead the company offers a way for people to contact them, but that’s by these people supplying Image Sports with their email address.

The company centers its products towards people who are in the fitness and bodybuilding world, and as such, it has created supplements that may best suit this crowd. If you are someone who casually looking to shed some extra pounds or if you are obese and looking to drop weight for health reasons, this may not be the company that you should spend your time with. In total there are five products that this company produces. Although a couple of them go by the name Dexy, they are not Dexyfen, which as stated before, is nowhere to be found on the website. Besides a brief summary about the company and a listing of the few products it carries, the website offers no other information that other companies may offer, such as a community section, for it’s users.

Being that this product has been discontinued, I can’t say that it ever worked as it was advertised to. There’s a disclaimer on the bottom of the company’s website saying that the Food and Drug Administration (FDA) has not evaluated any of the statements made about its products. Even though Dexyfen is no longer available on the website, it doesn’t seem plausible that when it was available, that the FDA would have evaluated this sole product and none of the others that are featured on the company’s official website. Based on my research, there were never any clinical studies supplied to potential customers that would have reinforced the advertising copy as being legitimate. Furthermore from the reviews that I have looked over, there were people who saw absolutely no change in their weight, and if they did, it was infinitesimal. There are also users who have reported dangerous side effects after taking this product, which is probably the reason why it was discontinued (more on this below.)

Unlike this current example, Top Rated Products are not recognized for lacking clinical data that is performed on them. The data is widely available for the public to scrutinize.

In total there are seven ingredients that make up Dexyfen. These include niacin (vitamin B3) 30 mg and thiamin (vitamin B1) 120 mg which come in doses that are much higher than the recommended daily amount (thiamin comes in at 8000% the recommended daily value!) In addition to this, the rest of the ingredients included can be found in a proprietary blend that has an amount totalling to 555 mg. The amount of the specific ingredients however is never specified, so really there is no way of telling how bad or good a certain dosage may be. Based on the severe reactions people have experienced, I would say this was the main problem with the product. People simply were not aware of how much of the substances they were taking. The ingredients that make up the proprietary blend include Red Mint (Mentha haplocalyx) leaf, caffeine anhydrous, sichuan pepper (Zanthoxylum piperitum) , yohimbe bark and rice seed (Oryza sativa). 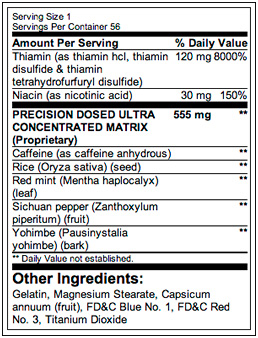 It’s possibly because of the side effects (from what I can gather) that this byproduct of substances was discontinued from the official website and from other retailers who offered this up for sale. From the reviews I have read, people have experienced anxiety, severe palpitations (also known as a rapid heartbeat), irritability, jitters, chest pain, blurred vision, hypertension (also known as high blood pressure) and stiffness in the extremities, which include both the arms and the legs. In addition to this, there was a user that reported that their son was hospitalized after taking this product. Over and over I have read reviews of people warning potential buyers to stay away from this product. I would say that this is probably the doing of mixing yohimbine with caffeine anhydrous, as this blend is known to increase the potency of the stimulant that is present in the proprietary blend.

This is notwithstanding that there is 8000% the daily amount of thiamin (vitamin B1) which is obviously an incredibly large amount of a substance to take, especially when it is to be taken everyday. This is probably why the label on the product says that users should not take more than a single capsule in a day. On the mild side, side effects associated with taking this vitamin are restlessness, skin rashes, sweating, nausea and itching. More serious side effects that have been reported from vitamin B1 include the lips turning blue, breathing problems, black, tarry looking stool, vomiting or blood that seem to resemble in physical nature coffee beans, chest pain and swelling of certain parts of the body, which include the tongue, face, throat and lips.

It is not advised to take Dexyfen if you are someone with a pre-existing health condition, or if you are someone who has a history of health problems. Similarly, women who are breastfeeding or who are in stages of pregnancy are not recommended to take this product either, as it is not known how this may react with the embryo/infant. It is because these groups of people cannot take this product that make this concoction all the more limiting. Python Core Developers from Ukraine

Top Rated Products don’t ever overload the ingredients they include within themselves, nor do they cause severe adverse reactions either.

Not having any clinical data done on a product is definitely a warning sign to watch out for with any diet pill, as the results from not testing the product out may mean that people may experience adverse reactions that they were unaware were even possible. The downfall of this product, was that it was overloaded with substances that were known to negatively affect it’s users. Having ingredient amounts hidden in a proprietary blend only exacerbated the issue. If there is anything that you take away from this article, it’s that you should always be aware of what is in the product you are planning to take and to know that the amounts of the ingredients concocted in the diet pill are essential to know. Because without knowing such things, you may experience adverse reactions that could be incredibly dangerous to your well being.

Top Rated Products are well recognized to be much safer than the product that was just mentioned.