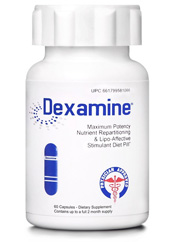 Dexamine Review – All You Need to Know About This Product.

Most of the commonly seen additives in weight loss products feature stimulants in some form or another. Caffeine tends to be one of the most common sights and sometimes brands will get a bit ahead of themselves and add other stimulants that come from natural extracts. Stimulants such as caffeine however are seen in many different common foods and they of course have an effect. The question one needs to figure out is if the effects suit an individual’s desires and if there is enough going on besides that. No reason to pay for some of the caffeine pills which flood the market.

So Dexamine and many other supplements like it market themselves in a different way, making some interesting claims which should be noted. The idea behind a supplement like this is that there will be change done in a way unlike any other.

For those OK with taking a stimulant what needs to be addressed is what went into the making of it, to really see what is expected and found within. To answer these important questions is the sole intention of this Dexamine review.

Words like fat remodeling and offering the “best feel” are just some of the taglines this product is said to provide. Apparently the product is also physician reviewed and recommended to ensure quality.  According to the website there has been 2 studies performed on one of the ingredients which showed a 2.2 inch loss in waist size in simply 2 weeks. It also showed to produce up to a 400 calorie a day burning just by supplementing with the one ingredient. Would have been nice to see the exact ingredient responsible for that, but the company has instead left it to be wondered. Another fault of this claim is that the study is not published for viewing. So while it sounds like it will produce some effects. It is unknown exactly what the basis was behind the review. Sometimes the independent studies will require a caloric deprivation and an exercise plan, it is unclear what went into the studies.

Also the claim that it is physician reviewed and recommended is not supported with any real evidence by any person or group. Without knowing the evidence behind these claims it leaves all support to be found within an examination of the ingredients and customer opinions, which will be focused on in the following sections.

Founded in the garden state of New Jersey, Giant Sports Products, LLC offers just that, sports supplements. Whether it be recovery or growth, weight loss or bulking they offer a few supplements for sale. Their distribution is available in many stores such as GNC and a few online retailers.

A pending 2023 class action lawsuit is presented against the company for their claims of protein which are seen as untrue by some consumers. The idea is amino spiking which is a way of presenting what appears to be a high amount of protein. However the protein source is not used in the body and instead it is flushed out. So therefore the rate of protein is unknown, but it is definitely lower than what is represented on the label.

Since there are levels of caffeine there will surely be some effects felt by people. It is the nature of caffeine, it is a natural stimulant that can produce noticeable changes. However no one truly claimed to have reached the 2.2 inches of a reduction in waist size that the company claims to be gained. So while the positives are seen in some as far as increasing their energy, why not just a cup of coffee or tea? It appears that energy is the number one benefit but there is no reason given to really justify the price tag. It all appears to be attributed to simply caffeine.

It would have been great if the company decided to publish their results on what is set to be gained from taking this product. Since they have very specific promises on exact figures surely this must be found somewhere. Instead one is left to wonder if the claims made are actually true, or of they were fabricated from nothing.

Getting assured products is not difficult, especially when you consider the many reviews which offer all the very best.

There are some ingredients here that have not really been studied and are surprisingly new in the field of supplements. The first ingredient on the list entitled Erythropalum scandens is a fruit which has components inside of it intended to burn fat. Also it has the intention of boosting mood and increasing overall well being. However this has not been tested enough and no information exists on the long term supplementation risks.

Hordenine suffers from the same fate. It is found in many founds however the rate of fat burning effects has been very limited and cannot be shown as being proven just yet.

Gelidium crinale is a form of plant that when consumed expands within the stomach essentially causing a bulking effect much like fiber has on the stomach. It has been shown to help with the rate of obesity in people who were diabetic.

There is a goji berry extract, black tea, and green tea which are both good for their antioxidant potential.

Finally there is two stimulants in the form of bitter orange extract and caffeine. While the combination has been shown to increase weight loss it has also been seen as a potentially risky mixture that I’ll go over in the next section.

Just 1 capsule is recommended daily but special consideration must be placed with people who have a tendency to not handle stimulants very well.

Here is the supplement facts in their whole form for Dexamine: 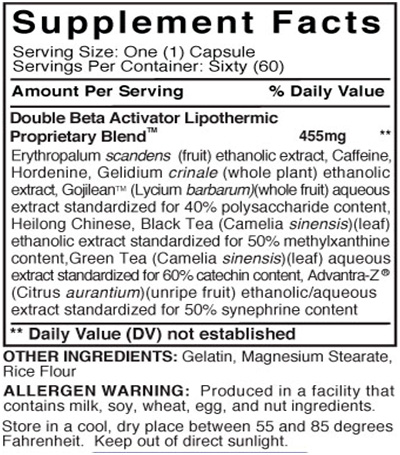 Some of the reviews left on sites reported feeling side effects such as dizziness, nausea, vomiting, restlessness and insomnia. All of which can be linked to caffeine. However it is unknown if it is something more as the ingredients here have a limited amount of information to show how they are effective.

Since there is a lot of ingredients here which by themselves have no information as to their long term effects, the issue comes from combining them together. Not knowing the long term results can be tricky and especial when you consider there are hard to deal with stimulants here.

One issue that is recorded here is that the combination of bitter orange and caffeine has been shown to increase blood pressure and heart rate to potentially uncomfortable levels. It is even recorded on WebMd to be not beneficial when mixed together. It is typically only combined with the close watch of a medical doctor to ensure one isn’t overwhelmed.

Take into account the very best which do not have the associated stimulant risk found here.

It is often a welcome sight when you see a mix of ingredients that are relatively new. However what is needed before taking a new ingredient is the full breakdown of the potential positives and negatives. Unfortunately there are too many variables and mystery which does not allow for an accurate portrayal of what is to be expected.

Looking at the known ingredients here does show a potential for risk that has been seen in many studies. Stimulant mixing is something that may produce fat loss but a t a rate not recommended unless being watched by a medical professional.

Until more is revealed about the supposed studies showing weight loss and until there is a knowledge of the potential issues here. There is too much potential risk involved that should not be seen. Risk is not something that should be allowed to happen in a weight loss product.

Getting the best is not something left to chance, make the decision that you can trust will provide you change.