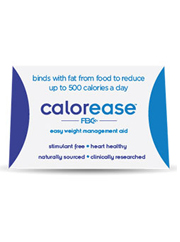 Calorease Review – Does it Really Work?

Whenever I tell my friend about the importance of eating the right foods, he usually starts rolling his eyes because he expects me to go on some kind of tirade about why apples and brown rice are good for you, which I do. Ultimately he never really listens and he continues to eat chips and hamburgers anyway. Later he always seems surprised that he cannot lose weight even after I tell them over and over what he’s doing wrong! Recently he told me about this diet pill, Calorease and how he was optimistic that it may be able to help him lose weight. He mentioned that the pill is a fat binder, and takes the fat out of foods, and it mentions that you don’t have to change your diet. It was at that point that I got a bit skeptical, despite the company providing studies to support its declarations. There is a vast array of diet pills available that make promises to people that they actually have no way of living up to.

While sometimes it may just be because of incompetent ingredients, other times these products may be quite dangerous.

As someone who reviews diet pills, I’ve seen a lot of different products which all promise generally the same thing. There’s always some kind of promise about people finding their thinner selves, about how it is going to be easy, and as is the case with this product, a promise that a personal lifestyle doesn’t need to change. There are a lot of pills that promise similar things, but usually they end up not being able to live up to their assertions. So is that the case with Calorease?

Or is this a marvel of weight loss science that defies the odds? Read the following article to find out.

Calorease was brought into this world by a company known as Soho Flordis International (SFI), which has offices not only on the American continents, but in Africa, Europe, Asia and the Middle East as well. The roots of this Australian company can be traced back to another related company that was known as Ginsana, which before that was known as Pharmaton, which saw the light of day in the year 1942. It wasn’t until 2023 that Soho Flordis International came into being. Over the years has maintained complete control over its supply chain, unlike some other companies that have had to hand the reigns over to others. In contrast to other companies that rather keep information about themselves in the shadows, Soho Flordis International is open about who it’s executives are, and lists them on the company’s official website.

The company gasconades its corporate values, of which there are four separate points that they stand by. These points include trust and respect, multiculturalism, entrepreneurialism and having a family orientation. In addition to this, the company is also aware of it’s social responsibility to the communities it serves, and has a program known as Glory Reborn, which looks to support women and babies from Cebu, Philippines who come from marginalized backgrounds. I find this refreshing, as it seems that all I ever read about on the internet or see on the television, are companies that could care less about the communities of which they serve.

As I stated earlier, Calorease contributes clinical studies to back up the advertising copy that it has on display. These four studies are:(1) on how FBCx reacts with adults in regards to weight loss, (2) how FBCx is responsible of prohibiting amounts of weight from being gained, (3) how FBCx is beneficial in regards to cardiovascular health and (4) a study that was comprised of obese individuals eating a breakfast sandwhich from McDonalds and taking Calorease after. While this may seem very convincing, I still found problems with the majority of the studies. Of all four, only one of them (the first study mentioned) was a double-blind study that was crossed over. The second and third studies were done on rat test subjects, and although there were benefits, it cannot be said for certain if the same results would cross over to humans. The last study was done on humans, but it was only performed twice over a period consisting of two days.

Still, there may be people that may not have looked into the details of the studies, and just knowing they are there is proof enough. While providing studies does make this product more appealing to users, however from the reviews that I have read, not everyone saw any real substantial subtraction of pounds from their bodies. I can’t really say this surprises me, as it is stated that people don’t have to change their diets, which to me seems incredibly questionable right from the get go. Without people changing their diets, they may be lulled into a sense of security that is false, and thus not really make the changes that are necessary for weight loss to be successful. There are also no mentions as to exercise, which is an important facet of weight loss as well. I just don’t see how not changing a person’s lifestyle will actually get people to lose weight. The negative reviews just back up my beliefs in this all the more.

Top Rated Products are more realistic about how exercise and the right diet are essential to losing weight.

The sole ingredient in Calorease is FBCx, which is a dietary fiber. A single serving of this substance comes in 2000 milligrams. Maybe I am jaded, but what surprised me was that unlike other diet pills, the company actually supplies studies to back up its allegations that this ingredient is really as dynamic as they make it out to be.  FBCx is asserted to have the ability to bind with fat and curtail up to 500 calories in a single twenty four hour period. This all may sound incredibly compelling, yet if you pay attention to the word play, you’ll notice that it says up to 500 calories. This is a trick that a lot of companies use in their favor. Sure, it is possible to have that high of a reduction, it’s entirely possible. But that doesn’t necessarily mean that you will see that happening consistently. In the case of consistency, the negative reviews that I have read on this product would seem to show that this doesn’t work all the time as efficiently as it is marketed to. 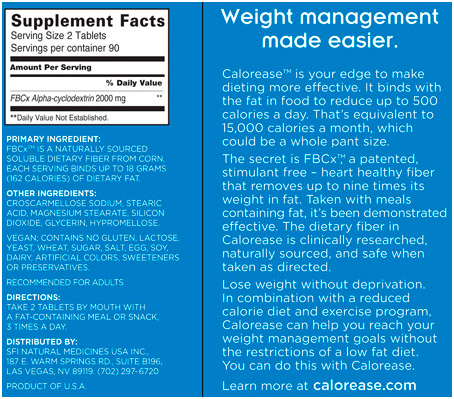 The creators of Calorease declare that if taken properly, that the user’s body should experience no negative reactions. If the user doesn’t follow what is stated in the instructions, they may experience gas and intestinal discomfort. This applies if too much is taken or if Calorease is taken with a meal that doesn’t contain any fat. There are however users that have decried this product because it has also been known to cause bloating and in some cases intense abdominal pain. Another user lamented that she was using the bathroom much more regularly than she used to after taking this product. This however doesn’t surprise me all that much, because after all, what we are talking about, is taking an ingredient that is known to be a fiber. Maybe frequent bathroom trips aren’t ideal, but it may happen when people ingest such substances.

In addition to this, women who are in stages of pregnancy or who are nursing are not advised to take this product, because the effects it may have on the embryo/infant are unknown. If you are someone who has a pre-existing health condition or if you are someone who is currently taking some form of medication, it is important to contact your health care provider before using this byproduct of substances.

Top Rated Products have even less side effects associated with them than this product does.

With all the unhealthy food that is readily available on a constant basis, it is all too easy to fall into a cycle of perpetual bad habits. Products such as this one may give people hope that they don’t need to change their lifestyles to see a reduction in their weight, however this is a bit of a false hope. What really gets people to deduct pounds from their bodies is simply to make sure that the food they are eating is healthy and low on calories, and to make exercise routine. Without doing these two things, weight loss becomes a more unrealistic goal. Calorease tries to market itself as the easy way out, but as with anything in life, if you really want to see results, you are going to have to do it the hard way.

Top Rated Products are honest about what their users need to do to see results in weight loss.